Where to begin? This is my first attempt at writing a blog post. In fact it’s my first attempt at writing, other than the chicken scratch time-cards I fill out for Michelle at Gannon and Benjamin, that I’ve undertaken in years! At lest four years to be exact, as that is when I bought Heart’s Desire, and the point at which everything in my life other than boat work ceased to be. Almost everything… So get on with it. We have now been in Nova since June 18th and have been bit lax about keep up this blog so I’ll be flexing what brain cells I can to remember back some 150 Nautical miles to our time in Lunenburg, and our introduction to cruising in Nova Scotia. It couldn’t have been better. 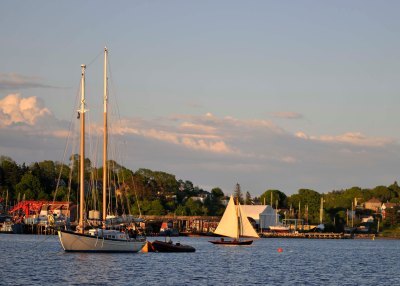 In Lunenburg, Heart’s Desire, and (sailing) Fo’get About It.

As Jess mentioned, we had a wild ride into Lunenburg harbor and began meting the local salts within the hour. Over the next couple of days the three of us wandered about town, checking in on the new Bluenose, which despite the setbacks is still an awesome sight to behold and will be stunning under a full press of canvas. We sampled the fine spirits of the new Iron Works distillery, found some showers, checked in at a couple of the local watering holes and spent time looking about the harbor in admiration of its lovely fleet of vessels and the colorful buildings that make up the waterfront. Quite literally everyone we met either built boats, sailed a schooner or did both at one point or another. One of the most eye-catching boats in the harbor was Sea Change a David Westergard designed and built schooner owned by Dorian Steele previously of Covey Island Boat works, builder, rigger and all around great guy. We couldn’t have been more lucky than to have met Dorian.

Our exchanges with Dorian had been few, and concerning questions about where to go on our way through Mahone Bay, but when I looked aft an hour or so after leaving Lunenburg and saw the silhouette of a double gaff schooner coming around the breakwater. I knew the sight of Heart’s Desire under sail had been too sweet a temptation to pass up. We spent the next three days cruising in the company of Sea Change, Dorian, Dana and Dorian’s kids Maya, and Nico and what company it was! Sea Change is not only a beautiful boat but she’s also fast! We spent our time admiring her full buttocks lines and rounded transom as she sailed past. For our first night we followed them into Tanner Pass, a narrow and deep cleft inland splitting Heckman’s Island off from the mainland. Our second night was in Sandy Cove on Heckmand’s Island. It’s hard for me to not get overly romantic about ripping around in the company of another traditional schooner. And I could be mistaken but I think the two boats enjoyed each other’s company as much we enjoyed Dorian and Dana’s. It’s one thing to sail an old schooner about and quite another to be able revel in the sight of those double gaffs against the back drop of stony shores and tree covered islands. I often wonder how we look under sail and if Sea Change is to judge then I sure am grateful for the others willing to undertake a challenging boat. 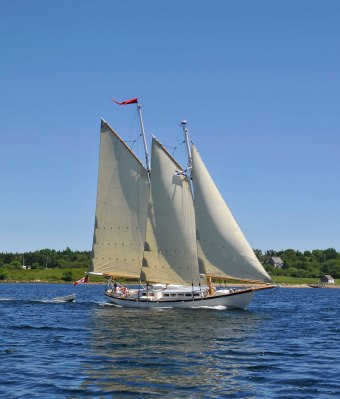 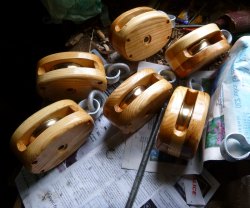 At Sandy Cove, Dorian introduced us to Arthur Dauphinee, fourth generation master block maker and icon of Canadian maritime heritage. It was a real pleasure to wander through his shop. Arthur fabricates every part of his blocks other then the cast shivs, which he get from the Lunenburg foundry just like his father and grand father before him. He fells the trees to make the cheeks for his blocks. He forges and galvanizes the straps and turns the peril beads, belay pins and hand spike on his many lathes and all while being in his 80’s! Truly amazing.

That evening we were joined by Dorian’s father John Steele, founder of Covey Island Boat works and Dave Westergard for a BBQ on the beach. The weather was stunning, warm with a great spread of stars as we sat around a bonfire and the kids dozed rolled up in sleeping bags.

Sadly, we parted ways from Dorian and Sea Change the following day after another great day of sailing. He could only sneak away from work for so long and I just couldn’t resist sailing on in the beautiful clear weather weaving our way through the many islands of Mahone Bay. We couldn’t have had a better ambassador for our introduction to Nova Scotia and I look forward with excitement to cruising again in the company of Dorian and Sea Change. 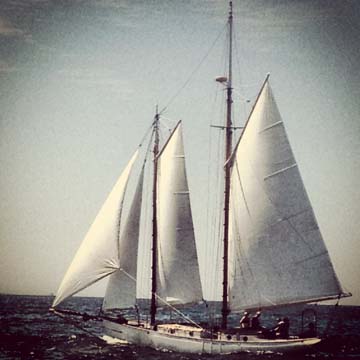