I’m not sure that I have the literary ability to convey the majesty of place in which I am writing this. I stop to listen and hear the song of birds echoing off tree lined walls of granite, only a stones throw away, rising up to disappear in the fog on either side of us. I can hear a waterfall, but it is hidden in the woods somewhere near. Drips of fog fall from the rig to patter gently upon the deck, lulling the mind into a state of peace. The rest is silence broken occasionally by the warbling cry of a loon.

It began as a 400’ cleft in a two thousand foot high cliff, completely shrouded in fog. We could make out the passage on the radar, but when the bright white breaking waves appeared less than 100’ off the bow, and all I could see was sheer rock, my courage left me wobbling in the knees. With an on-shore breeze, I have to admit, there was nothing other than faith in our electronic chart plotter and radar to hold on to as we passed in from the sea; blinded by fog with rock and waves all about us. But as we entered first the sea swell disappeared, then the wind vanished. We turned gently to starboard and the fog lessened it’s grip on our vision allowing the great walls of Grey River Fjord appeared, as if by magic. It was truly an awe inspiring moment in which the adrenaline of fear gives way, leaving you speechless in the presence of extraordinary beauty. If I was a religious man I might have seen god in the space between fear and awe, but as I’m not, it was big mama earth that brought forth my primeval roar! And I just kept roaring until the small outport village of Grey River appeared, nestled in it’s steep valley. 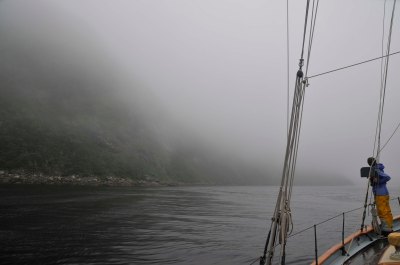 Grey River is one of a few remaining outports on the southern cost of Newfoundland. We will write more on these outports in the future as we are still taking them in and researching the details. But in a nutshell…. Newfoundland, known to the locals as The Rock, is a sheer and trying place to live. The south coast is a land of rock, cliffs, salt water, and taiga with bogs, rivers and an uncountable number of lakes. The coast was settled by fishermen and their families all along the sea as it is impossible to build roads here. The people, pure and simply put, are amazing. The more austere and difficult a life they live, the friendlier they are. We have been enjoying the cultural experience here as much, or more, than the stunning natural beauty. Though they do of course go hand in had. Since the 1960’s there has been, with steadily increasing speed, the closure and resettlement of these outport communities. Basically it is because of globalization and the collapse of the fisheries. It has struck me as very similar to the loss of other unique and independent cultures throughout the world I just never realized it was happening so close to home. As I said this is just a quick little synopses of my thoughts on the people and culture of southern Newfoundland. There is much more to come.