Over a year ago when Jessica and I first began talking about taking Heart’s Desire up to Newfoundland we thought of Gros Morne National park, probably the most well know fjord in Newfoundland, if not in North America. I’ve never been there, but it’s supposed to be extraordinary. It’s the fjord whose photo graces the travel brochures of Newfoundland. It’s the Fjord that everyone who comes to Newfoundland strives to see, and are able to get to. That “able to” being key. I”m sure that Gros Morne lives up to it’s reputation, and I look forward to going there some day, but if you want fjords, I mean really want fjords, then you must go to the South Coast, but you’ll have to find your own way there. 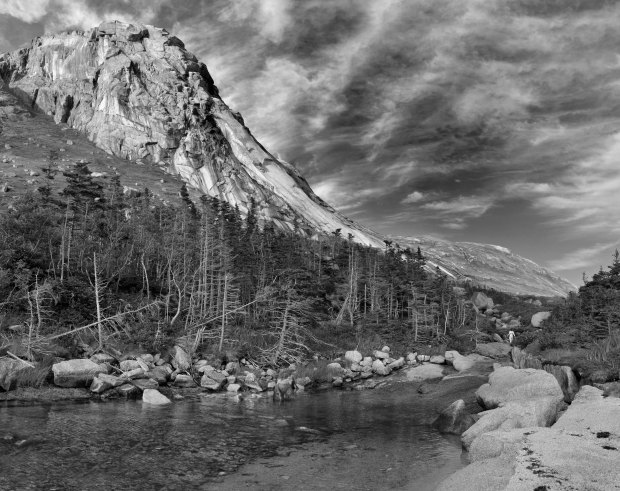 I don’t know if it was the allure of the tropical sun or what that pulled glaciers south, tipping them over what once must have been an impressive mountain range and into the sea, but you’ll find at least 15 spectacular fjords on this south coast. Among them are the longest and deepest fjords in Newfoundland. Some reach inland nearly 15 nautical miles and plunge to depths of over 1200’.

Our first taste of these fjords came in Grey River which, as I already wrote about, is just a crack in the granite coast line that suddenly opens into a giant three armed affair, cutting 10 miles inland, with highland lakes spilling into a plethora of waterfalls. From there we had and easy 11 nm day to La Hune Bay, which is a 6 nm long fjord with depths of 500 feet. Sadly we only made it some two miles into the bay when a small cove tucked in under a beautiful 400’ waterfall yanked our anchor from it’s roller and cast it down in 40’ of water, were it was stuck for two days. We had found Deadman’s Cove and some of the best hiking I have yet experienced. I’m not talking about a ramble through the hills, or a stroll in the park, but some good hardy bush whacking, back country hiking. Bring your boots, some tough pants and good dose of adventure because you’ll be fording streams, scrambling up steep slopes, trudging through bogs and fighting your way through the tuckamore. There are only short puny trees so the sun is relentless, and if the wind dies you probably will too, from exposure to bugs. But a waterfall shower, a swim in one of the endless mountain lakes or just the breathtaking views from atop the cliffs that make up these fjords, and it will all be worth it. Just remember you have to get back down. There are moose and caribou to see, all sorts of birds in the wetlands, many wild flowers and tons of berries to pick! Jess will tell you all about that. We did some great hiking out of Grand Bruit, Grey River and Francois, but it is a different sort of beast when there is no one about and you’re blazing your own trail. Be careful, and don’t slip as it’s a long way to the boat and even further to medical help!

Hiking up in La Hune Bay

Of the South Coast fjords we saw, in order from west to east, La Poile Bay, Grey River, La Hune Bay, Francois Bay, Rencontre West, Devil Bay and Hare Bay. We wanted to save a few for our next visit. I can’t really say which was my favorite, as each one has something special to offer. We had waterfall showers in La Hune and Hare Bay and lake swims in just about all the others. The hiking we did in Hare Bay was a little different from the others in that we worked our way up the Morgan River in the northeast arm. The river flows down through an expansive valley into the sea, rather than toppling over a cliff’s edge like the other areas. Within the first mile the river has carved out a narrow and dramatic canyon similar to something you would find in the southwestern United States.

The Morgan River, in Hare Bay.

East of that Devil Bay is a saltwater flooded Yosemite Park-like fjord, known amongst rock climbers for the sheer cliffs that leap up all around you. We didn’t even bother trying to anchor in the deep water but rode the catabatic winds pouring down the cliffs in and out of the Bay. In Rencounter West we slaughtered the blueberry bushes, met more wonderfully nice Newfi’s, and hiked up to a mountain top where we had nearly 360‘ view up into the fjord and out to the open ocean. If I haven’t already sold you on this coast line I could just keep going…… and to sail it all in an old wooden schooner…..

This coast is no secret, and we saw more cruising boats along here then we have elsewhere. But for all the boats and sailors up and down the coast of eastern Canada and the US, it’s amazing how very few we saw. For about a week we fell in with the ketch Plover, sailed by Chris Bill and their dog Flaco and MarySol crewed by Pat, Richard and Mervyn. It’s a thrill to ‘get away from it all,’ but a little company from time to time is quite nice too. 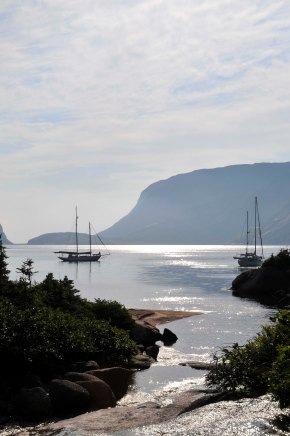 The Morgan River entering the ocean in Hare Bay. 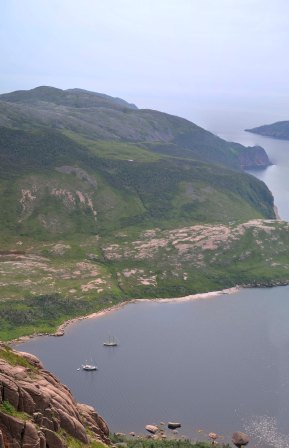 View from the top of the falls into Deadman’s Cove, La Hune Bay. 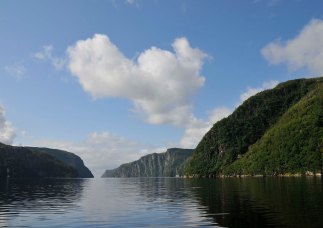 Rencontre West “The Cove”, site of a resettled community, now the summer home for some cabins.

In the Highlands, La Hune Bay.