Well our last 12 hours of sailing was an adventure. I was asked by the Lunenburg Librarian (not a sailor) if I was afraid for my life when I told her we arrived on Wednesday by sailboat… Well, I answered, not really afraid I would say… A little nervous I suppose.

On Tuesday night I did my first ever night watch. I had managed to avoid (or really just Matt & Ethan were nice) and got away with not doing one the first two nights… Instead I came on at 4 am when the sky was somewhat lit and the day was only getting brighter. Tuesday however I did (some of) my part and stayed up for the 9 pm to 12 am watch. Harnessed in I felt alright about not falling overboard, but the waves seem to double their size at night and as soon as everyone else had gone to bed, other boats and lights appeared on the horizon. It is difficult to tell how far things are in the dark, but thanks to our radar I could tell they were more than 3 nautical miles away, a good safe distance, at least for my unpracticed eyes.

I went to bed at midnight happy to be relieved. With seas coming from the south and our intended course almost the opposite direction, the constant issue of an accidental jibe had been on our minds all day. It only got worse as the night went on, the wind shifted and we got closer to Lunenburg. Despite all these worries however the stars out over the water with a 360 degree view around and 180 degrees overhead are pretty spectacular. Also amazing is the amount of phosphorescence in the open ocean. Around the Vineyard we can occasionally see glowing bits, but away from all the light pollution of land, our boat left a green trail in the water and the waves left a glow as the broke on the surface. 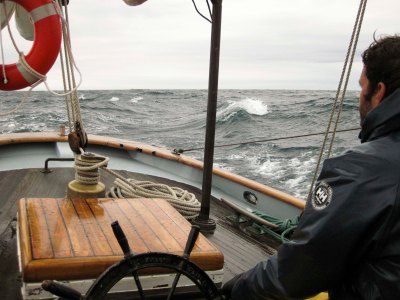 Ethan takes the helm, easier to look backward at the approaching waves with Jess keeping an eye forward.

Around 7:15 am we were 30 miles out of Lunenburg, Matt reefed in the main sail, doused staysail, and we jibed around to run for Lunenburg with 2o knots of wind from the stern. Winds slowly increased to approx. 35 knots, and seas built to 8-10 ft. The steep confused sea as we neared land made steering a challenge but the boat handled well.

Matt taking in the fore as we enter Lunenburg

A little while later Ethan took the helm and Matt took down the main sail, took the jib in and (with some difficulty) reefed the fore (the first time we’ve had to do that!). We were still cruising down waves with just the reefed fore at times over 8 knots. Visibility became increasingly poor (1/4 mile or so) and wind picked up to near gale but thanks to radar (thanks June schoon) we could “see” land before we could really see land. It was thrilling to say the least (and cold, and wet).

By the time we arrived in Lunenburg we were all soaked, the boat was soaked, and we had not eaten much. I still can’t get over wearing more clothes on the trip than I do skiing in -40 degree weather but you really don’t move much on the boat. 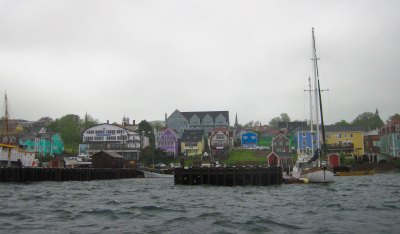 Just after we picked up a mooring and went below to decompress we heard a welcome knock-knock on the hull. Not even in port for 45 minutes and we met half the folks with boats as they sailed around us. We ended up back out sailing for the local Wednesday night “race” night. Thanks to Morgan Douglas who’d phoned up Walter, who seems to be the unofficial harbour master of Lunenburg. While we had thought Vineyard Haven a bit of an anomaly with its wooden boat collection, but the tradition is alive and well here we’re happy to report! We had a BBQ on the team floating dock/house and felt very welcome and relieved to be here. Lunenburg has many characters we’ve met but every person has been more than welcoming and extremely friendly. A destination recommended for any cruiser heading south of Halifax, and a must if you have a wooden boat or schooner!